When the bridal party enter the reception venue a song that suits the bride & groom’s personality can be played to emphasize this grand entrance! 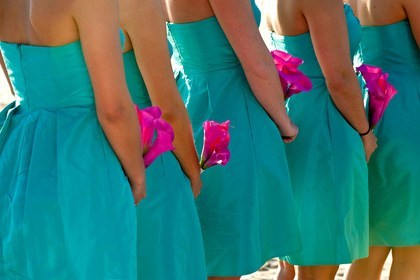 This “first song” of the reception works very well as an upbeat style song that the guests can make some noise, stand, clap and cheer as the bridal party enters the venue.

It can even be a little cheeky with a theme piece of music (Like the 60’s Austin Powers theme for example).

The Bride and Groom can have their own entrance song after the Bridal Party has been introduced or the bridal party introduction song can be continued by the DJ / Entertainment.

Just remember a slow song can make the entrance more elegant (but less exciting) or an upbeat song can be more fun (and energetic!).

If the Bride and Groom are entering the venue down a flight of stairs for example, a slow song would be best suited.

What ever song you choose, make sure it reflects your own style and it gives your guests an idea of the celebration, fun and dancing to come!

From here you can choose a Bride & Groom Entrance song or check out our Cake Cutting song ideas!

More about the Bridal Party Entrance 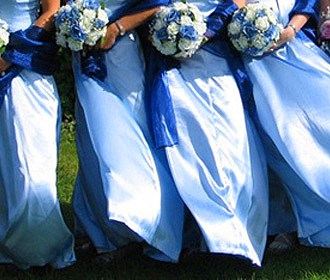 The introduction of the bridal party at the wedding reception is generally the first opportunity you’ll have to really show your personality in a more relaxed setting – without concern about whether your choice of music or the style of introduction is formal enough or is in line with the proper religious or official tone required.

This is when you can cut loose if you want to and really have some fun.

Of course, if you prefer to keep your reception elegant and low-key, you can certainly do that as well with formal introductions that will set the tone for the rest of the evening.

Introducing the bridal party gives all of your guests the opportunity to put names to the faces of the wedding participants who are so important to you and your new husband or wife. It’s especially nice if during the introductions the MC can include a brief personal note about each person so that the guests can make a connection.

For instance, “Introducing Miss Kathie Sullivan, the bride’s college roommate and best friend,” for a formal introduction. If you want something a bit cheekier, try, “Here’s Kathie Sullivan, who helped the bride survive more than one all-night cramming session for finals at Cal State University!”

Keep in mind that the Master of Ceremonies doesn’t know the people he or she is introducing, so provide the information on a neatly printed sheet a few weeks before the actual date so he or she has time to review it and practice it a few times before the reception.

A Smooth Flow to the Introductions

You’ll want everything to sound as natural as possible without any stumbling over unfamiliar words.

If anyone in the wedding party has an unusual name, spell it out phonetically next to the actual name to make it easier to pronounce.  Have another copy available the day of the reception (the Maid or Honor or Matron of Honor should be in charge of it) just in case the announcer doesn’t bring his or her copy – being prepared for an emergency is always best!