A wedding cake is a traditional symbol, which is eaten and cut at weddings and as the new bride and groom cut their cake it signifies their commitment and new life together. 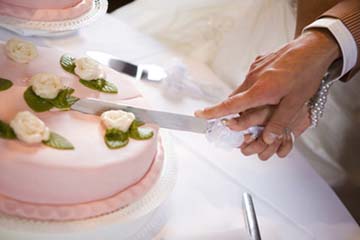 The newly weds, breaking bread for the first time so to speak.

The cake cutting song can be the Bride and Groom’s favourite song and a slow tempo, romantic song works well for this tradition.

Songs that have sugar and sweet references have been popular and a background volume level during this reception ceremony is suffice. Before the cake is cut the MC can ask the guests if they would like to take photos.

The Wedding cake is usually a strong structured cake, such as a fruit cake. To allow the icing and decorations stay firmly in place.

Wedding cakes can be multi layered, tiered cakes and with amazing decorations. From a statue or representation of the couple, doves, gold rings, ribbons and horse shoes.

The image of a Traditional Wedding cake is of a tiered cake with three to four levels (optional for amount of guests) and as it rises each tier is slightly smaller than the other. As Wedding cakes have developed some people choose to have smaller dessert type cakes, such as cup cakes individually served and placed in the shape of a tired cake.

The Wedding cake is placed in a central position at the reception, waiting for the right time to be cut. The timing of the Cake cutting will depend on your wedding, as some will have the cutting done earlier in the reception or some later. As the bride and groom prepare to cut the cake, friends and family gather around with much anticipation and cameras a ready.

A selected piece of music is often chosen to represent the bride and grooms love for each other and new life together. The next step of actually cutting the cake is very important.

Make sure your photographer is ready and has got the best angle to capture your special first cut of your Wedding Cake. You may want to consider a “mock cake cutting” also. Take your time and pause so as your friends and family can snap a great shot of the cake cutting.

Cutting into the lowest level is best as the top tier may be too unstable.

The knife is held together with the grooms hand slightly over the brides and depending on the type of cake and the hardness of icing you may need to use more than one hand.

Feed each other first, you may wish to use your hands, a fork or spoon. But this is your moment of nurturing each other and taking that first bite together. Offer a piece to your family and friends, connecting the two family’s as one. The Wedding cake is cut, applause from all around. The happy and loving couple’s life as newly weds begins and it’s also time to celebrate.