The recessional ceremony song is the song played when the Bride & Groom return down the aisle after the wedding is complete – After the bride & groom kiss!

This is the part of the wedding ceremony when you’ll be feeling most exhilarated – you’ll be past all of those jitters, the official ceremony will be over and you’ve just been announced to your friends and family as man and wife!

During the recessional, your guests see your smiling faces and get to enjoy your obvious happiness.  It’s one of those magical moments they get to share with you that’s truly rare and well… magical.

The music should be a reflection of your happiness.

There are no rules to the song choice here and an upbeat happy song works well.

Any of the Bride and Grooms favourite songs can be used whether it is a popular song in the charts or the traditional “Wedding March” song.

This Will Be (An Everlasting Love) – Natalie Cole
1975 | Youtube

More about the Wedding Recessional

The recessional music usually begins just as you are introduced or, in some ceremonies, just as your first kiss ends.  The music should be triumphant and celebratory, which is why you’ll often hear music for recessionals that includes trumpet music in, often referred to as “Trumpet Voluntaries.” 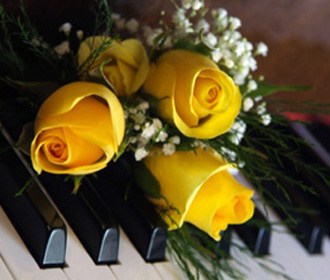 Hundreds of years ago, these classical pieces would accompany the arrival of triumphant kings and queens in European cities.  Today it can announce the triumphant marriage of a couple embarking on the adventure of a new life together.

Why Bother with a Recessional?

Don’t skip the recessional at the end of your wedding ceremony – it’s one of the elements of the wedding that your guests most enjoy.  It’s the moment when they first get to see the bride and groom together as a couple.

During the ceremony, you were both spending most of your time facing away or facing each other.

There are also practical reasons for having a recessional.  As you leave, the guests remain in their seats while you pass by.  After you exit the front of your ceremony venue, your attendants will exit to music as well, giving the guests the chance to admire each of them as they leave.

Wedding Recessional Music Can be Lighthearted

Since the official ceremony is over and you’ll be feeling incredibly happy, you’ll naturally gravitate toward joyful music.  We mentioned music that was festive earlier, but you can also be light-hearted and have some fun with your choices if you like (and it is acceptable to the official who performed the ceremony).

One of the most popular choices if you want to stick with the traditional is the Mendelssohn’s Midsummer Night’s Dream, popularized way back in 1858 when it was played at the wedding of the English Princess Royal.

Today most people simply call it the Wedding March.

If you want to be less serious, choose something like the Beatles’ When I’m 64 or Smashmouth’s I’m A Believer to bring a smile to everyone’s face and lighten the mood.

It will shift the mood a bit from solemn to festive but keep things focused on the real point of the day – that you’re celebrating the start of your new life together and how wonderful it’s going to be!